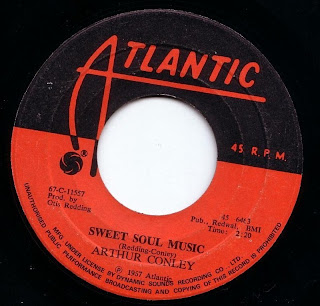 Arthur Conley arguably was one of Soul's most tender stars. Arthur's star shone short but bright, immortalizing himself with the smash Sweet Soul Music. The genre's anthem, one of those songs everybody knows and knows how to shake their hips to. Few might know Conley sang the damn record, but everybody knows how to participate in its joy. You'll find few, if any, folks who do not like that particular song. The song might have been a blessing to the buying public, one might wonder if it was such a blessing to Arthur. Sweet Soul Music defined the path his career was going to take. After hitting big once Arthur was surrounded by people who wanted to see him repeat that success. It locked a few doors Arthur might have taken and ultimately was one of the reasons why his career stalled.

Arthur started out as Otis Redding protégé, cutting sides for his Jotis label. But pupil or not, Conley was clearly the better singer. His voice was clearer and had a much better range than Otis'. Anybody who's heard "Let Nothing Separate Us" on the Sweet Soul Music album will adhere to that. Arthur was a mighty fine Deep Soul singer, able to instil a fragility in his testimonies, an honesty in his ache that was quite rare in the macho world of Soul. Arthur was one of those artists that gained an enormous respect amongst his peers. This was reflected in his inclusion in the Soul Clan, the only Soul super group the sixties ever knew. The Soul clan consisted of Solomon Burke, Wilson Picket, Ben E. King and Joe Tex. In sales Conley was a light weight compared to those, in talent he was their equal. But with his career being pushed in the direction Sweet Soul Music had taken, this talent never fully materialized.

Conley was never cut for the music business , a sensitive Soul who just wasn't up to the harsh realities and strain the record biz brought. On top of that Arthur was a homosexual man in the masculine world of Soul, something he hid from his peers. After Otis, his rock of Gibraltar, died, Conley soon left the business. First living in Brussels and London, he finally found the love of his life in Amsterdam in 1981, a Dutch carpet weaver, who had no idea who Arthur Conley was, and miraculously had never heard Sweet Soul Music. 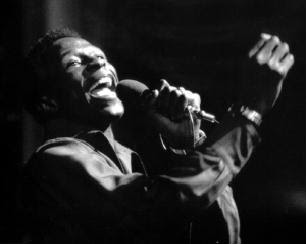 But before Conley said farewell to live and recording music for good he had something of a hidden comeback on the wrong side of the track in Amsterdam. In 1979 Conley lived in Amsterdam under the name of Lee Roberts. Conley formed a band under that name but was uncovered by drummer Dick Baars who happened across one of the band rehearsals. All though Conley refused to admit it at the time, Baars was sure it was Conley as he had just bought a record of his that same day. Here was the man on the cover!! Baars convinced Conley to join his band the Sweaters on the fact that he claimed to have a real Hammond b-3 organ and horns!

Robert Lee & the Sweaters would ultimately perform four evenings in the ghetto of Amsterdam at a small cultural centre. The first night drew few people, without exception all from the former Dutch colony Suriname, where Conley had been a big star. The second night some returned with album sleeves to make sure. Although Robert Lee denied to be Conley the word spread like wild fire. By the final night the tiny cultural centre had people standing outside the door. Somebody in the audience was so smart to record this show, resulting in a live release under the name of Robert Lee in '88. Arthur Conley simply didn't want to be associated with the name that brought him fame. 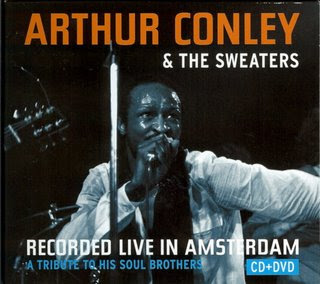 Although the sound is raggedy, Arthur Conley and the Sweaters is one of Soul's greatest live albums. The atmosphere is reminiscent of Sam Cooke at the Harlem Square club. The backing band is far from tight but pure and raw Soul. Arthur's voice hovers somewhere between the raucous vocals of Otis and the near perfection of Sam Cooke. As the evening progresses and Arthur gets deep into the great Soul hits (none of his own) you can feel the excitement and the tension building. The crowd is almost visible hanging on his lips, knowing they are witness to a private comeback of one of Soul's legends. Arthur came back full force that night in the intimacy of a few hundred people. A few more performances would follow before the curtain fell for good. But thanks to that one recording his final moment of glory is kept for eternity. The Album is now finally available for the international market for the first time. Live in Amsterdam is an essential album in my book. Dick Baars released it through his own label with a minimum of distribution. So it might be hard to find. Luckily Baars now runs a small record store, remember those, in Amsterdam. Stop by if you’re ever in the neighbourhood.

Read more on Arthur over at Red Kelly's excellent "B" Side


Posted by SoulBoogieAlex at 10:57 PM

I was excited to find another Springsteen blog - come check out mine too:

Looking For Your Stories

I'm revamping the Boot Tracker by combining them with your stories. One of the things I enjoy about the message boards are the touching, crazy and exiting stories that pop up from time to time. Great yarns on what impact the very first show had, wicked exploits, grand adventures, heart breaking tales, they've all passed by. I would like to give some of those stories a home here on Boss Tracks by combining them with the recording of your personal show of legends!

So if you were at one of those legendary shows, if you had a lucky encounter with the man himself, if you recall the very moment you were converted to the E-Street nation, let me know. Pictures to go with them are appreciated, but not necessary and it always helps if you own a recording of the show, but the story is what matters!

You can send your contributions to soulboogiealex@gmail.com. I look forward to them. And who knows, with Boss Tracks currently linked up to the official site, some one else might take a sneak at them as well. After all, the tour's over, what else is he going to do with his time!
About This Site

Tracking The Boss On The Web

Blog Roll (Springsteen and beyond)

Welcome saints and sinners, A while back as a big Soul music fan I started a blog called the Soul Shack. Almost immediately other things leaked into the blog besides Soul. Music and movies that weren't necessarily Soul music but did get to the soul. One of those interests was the music of Bruce Springsteen. I'm a big fan of the man and every month there were one or two items that just kind of sneaked in there. One of the main attractions to me about Springsteen is how you can trace the history of R&R through his music. Not only are his own songs littered with references to the past of R&R but the man also covered hundreds of songs from R&R's rich past. In all there are over a thousand.

A while back I decided to start chasing these sides, begin a collection of original 45 rpm records that Springsteen covered or overtly referred to in his music.Reason enough to start a new blog dedicated to the works of Springsteen and those who inspired them. There are a multitude of websites and blogs already dedicated to the man, but I feel this approach does have something to add to those corners on the world wide web.

So what to expect? In the coming years I will review songs that were either covered by Springsteen or referred to in his songs as soon as I find the original version on a 7" record. Real vinyl, no CD and certainly no mp3 or other digital format. Expect only the real deal here. I'll try to post about all those treasure troves I hope to find here. Besides that I will be reviewing Springsteen related material found on vinyl, records written or produced by him or members of his band.Every find will be available in mp3 format for a short period of time if possible backed with a live version of Springsteen if available. MP3 files are posted here strictly for the purpose of music criticism and comparison and therefore fall under the "fair use" guidelines of U.S. copyright law. If you find any material here on Boss Tracks that you feel violates your intellectual property be free to contact me at soulboogiealex@gmail.com.This will be a labor of love and it is not my intention of stepping on any body's toes here.

To flesh the site out a little, Boss Tracks will also feature a monthly Bosscast. A pod cast dedicated to the music of Bruce Springsteen, the roots of his music and related artists. There will be occasional concert reviews, articles found on the net and in depth reviews of his own work. If there is anything you'd wish to contribute, Boss Tracks will be open to other users. Just drop me an e-mail if you've got a nice find yourself you wish to review!Hope to find you here chasing with me!